Almost a month after the Cannes red carpet, CFDA awards gave us some major fashion moments that we are currently gushing over.

The fashion industry’s top influencers are recognized for their contribution to the industry. Right from our favorite celebrities, models & designers, everyone was seen in their best fashion self and inarguably presented us so many fresh looks.

So let’s check out the stars who ruled the red carpet this year.

Naomi Campbell in Calvin Klein 205W39NYC: The supermodel was seen in a Calvin Klein red dress with fringes and knitted details. Everything about the look is totally a winner. 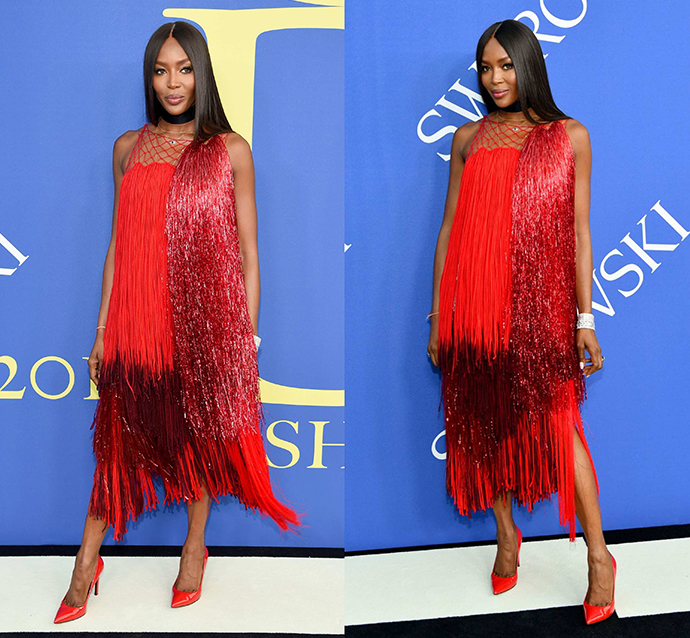 Amber Heard & Jourdan Dunn in Michael Kors Collection: Both of these Michael Kors ensembles won our hearts. One is a floral appliqué dress and the other is a sequin pantsuit, both mesmerizing. 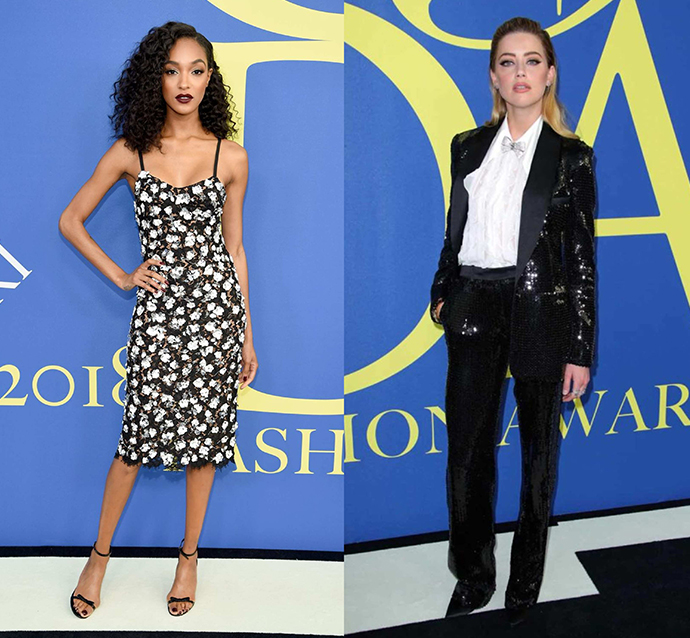 Lupita Nyong’o & Gigi Hadid in Versace: Lupita was seen in a Versace mini dress with black beads & feather detailing and statement choker. On the other hand, Gigi was seen in vibrant prints on prints ensemble which was something new and versatile. 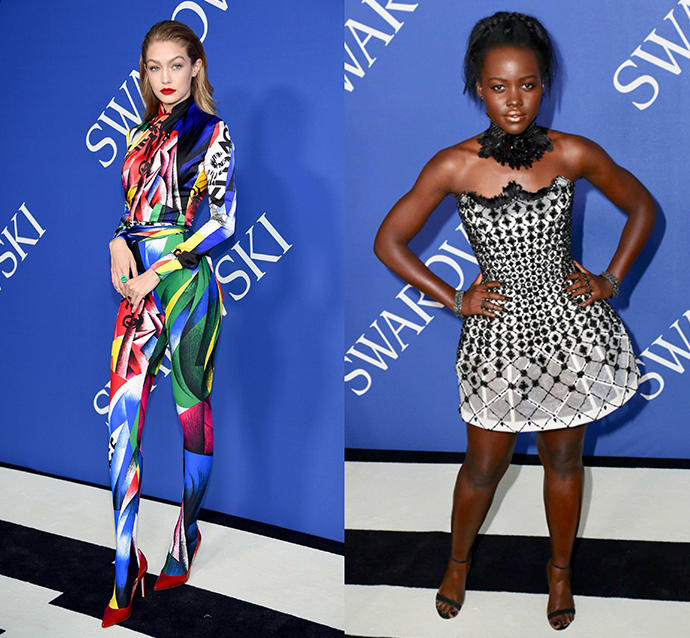 Kaia Gerber in Alexander Wang: Okay, so this one was something truly versatile. Kaia was seen in an Alexander Wang ensemble which consisted of shorts, high low striped shirt and logo tights. 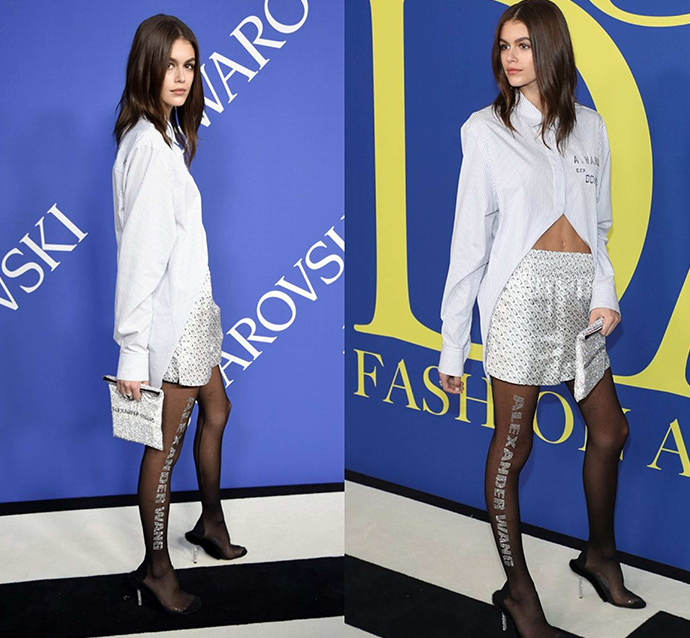 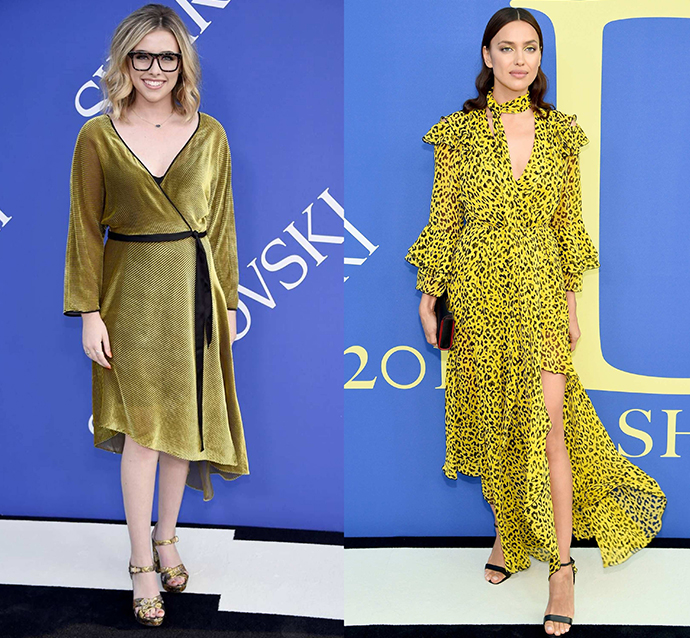 After the all black red carpet at the Golden Globes Awards, we finally saw a rainbow of colors at the Critics Choice Awards 2018. Celebrities were seen in vibrant and summertime hues which were quite interesting. The unexpected looks definitely caught our attention and here are our favorite looks from the event.

So, let’s quickly have a look at the best dressed celebrities from the night!

EMILIA CLARKE IN DOLCE & GABBANA: Emilia looked simply stunning in a studded Dolce & Gabbana shift dress and with that hairdo, she was definitely sparkling! 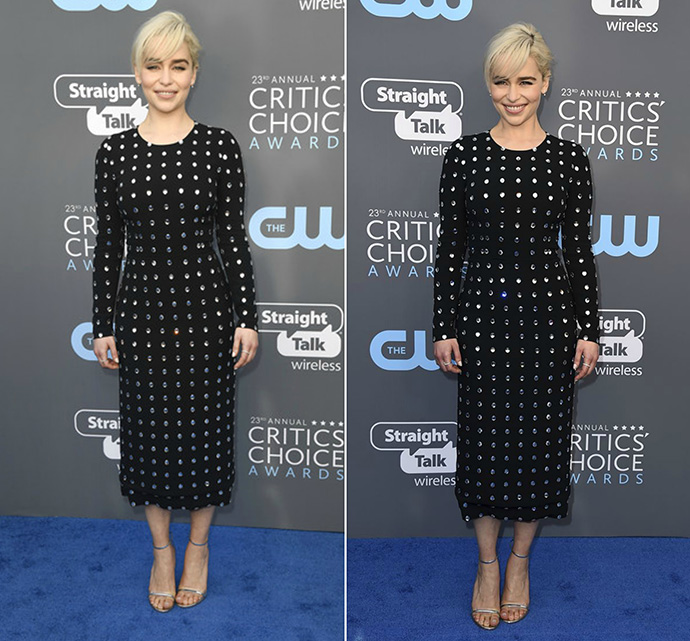 JESSICA BIEL IN OSCAR DE LA RENTA: Well now this is something refreshing! This Oscar De La Renta gown featuring a collage print is such a standout number. We are loving the details of this tulle dress. 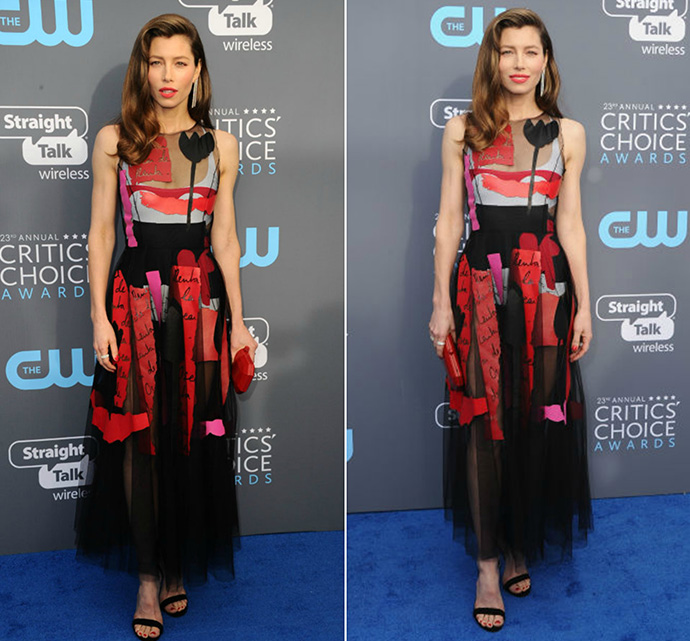 GAL GADOT IN PRADA: Have you ever seen a more stylish super hero? Well, surely not! Gal was seen wearing a Prada tulle dress featuring silver sequin embroidery all over. The embroidered belt detailing was such a beautiful addition. 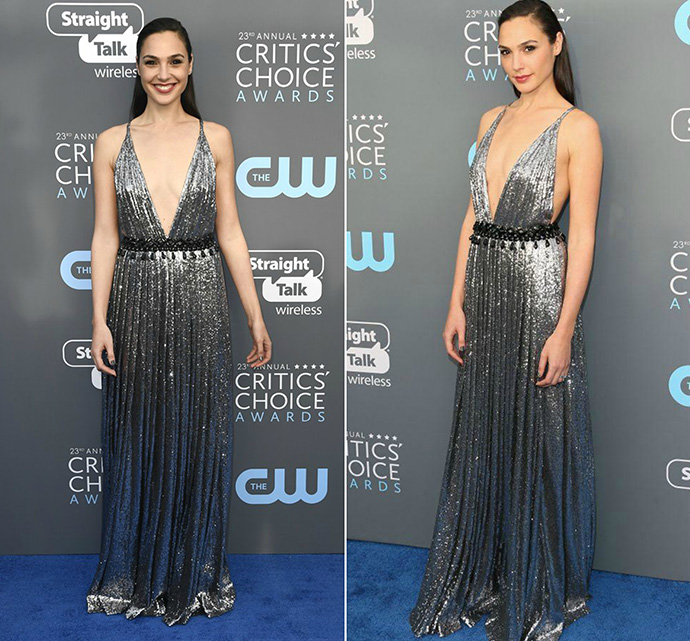 EMMA ROBERTS IN GIORGIO ARMANI: A plain white gown can look so appealing if it is a Giorgio Armani gown. 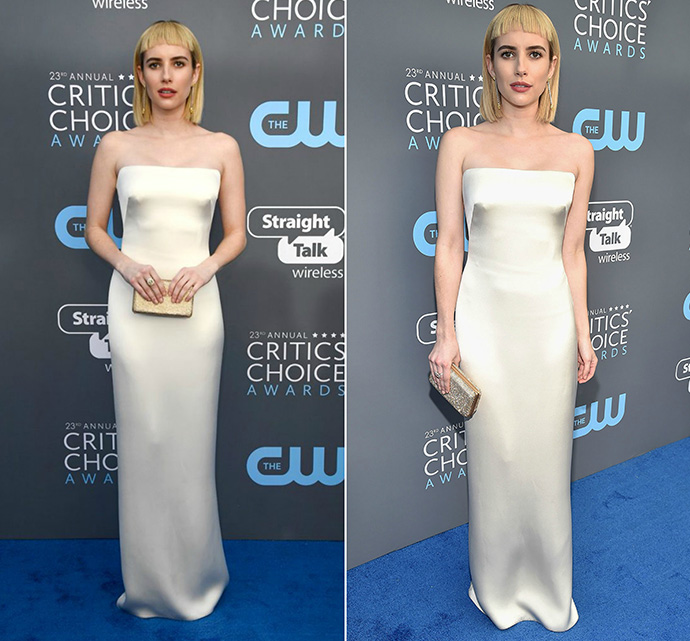 SAOIRSE RONAN IN MICHAEL KORS: This draped style Michael Kors gown in blush color looks great on Saoirse. The simple style and all over embroidery gives out a very chic appeal. 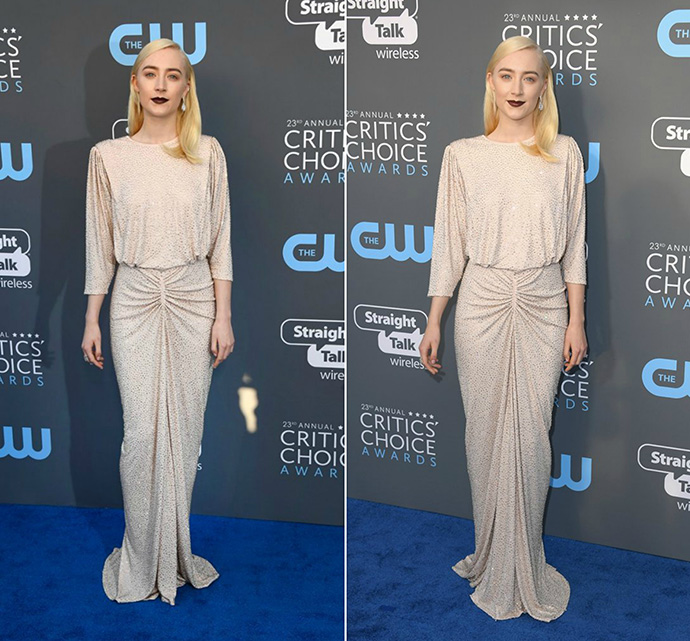 ZOE KAZAN IN VALENTINO: The vintage touch of this Valentino gown was definitely something different. 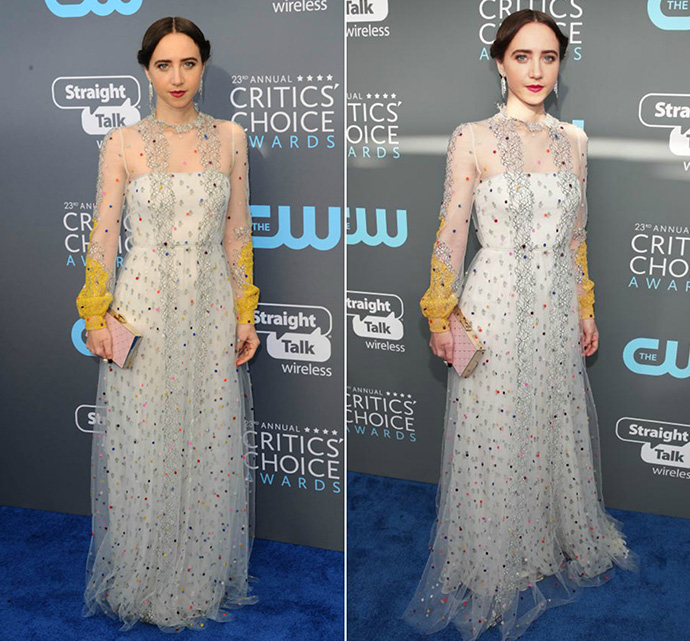 The award season of 2018 has begun and the very first award show i.e. The Golden Globes Awards Ceremony was not like the usual nights. All our favorite ladies showed their solidarity and wore black to support the #TimesUp Movement. The color black was chosen as a symbol of protest against the harassment by powerful men in Hollywood.

The red carpet was full of stellar black gowns and made the night a little more special. So, let’s have a look at who aced the dress code and grabbed everyone’s attention.

GAL GADOT IN TOM FORD: The Tom Ford gown worn by Gal Gadot is a total winner! The strapless gown along with the tuxedo jacket and finished with a sleek bun gives out such a simple yet powerful appeal. 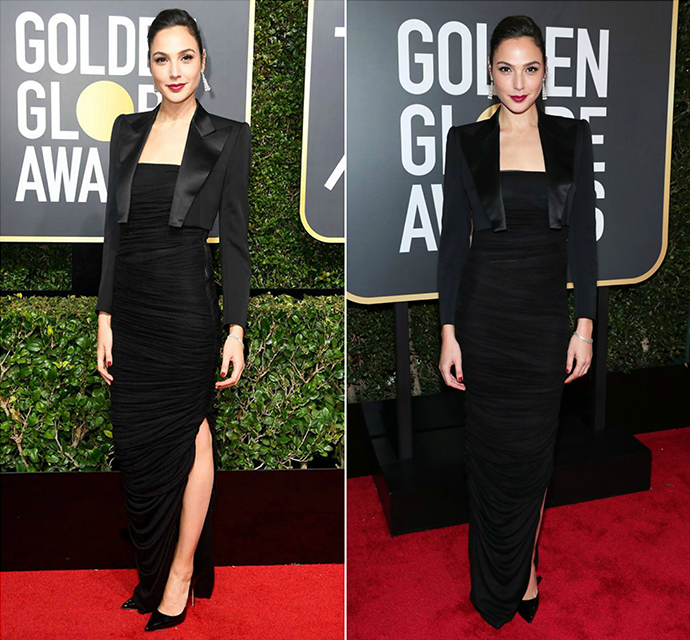 EMILIA CLARKE IN MIU MIU: Emilia chose a simple Miu Miu gown with the highlight being its neckline. The super sleek and chic look was definitely a standout. 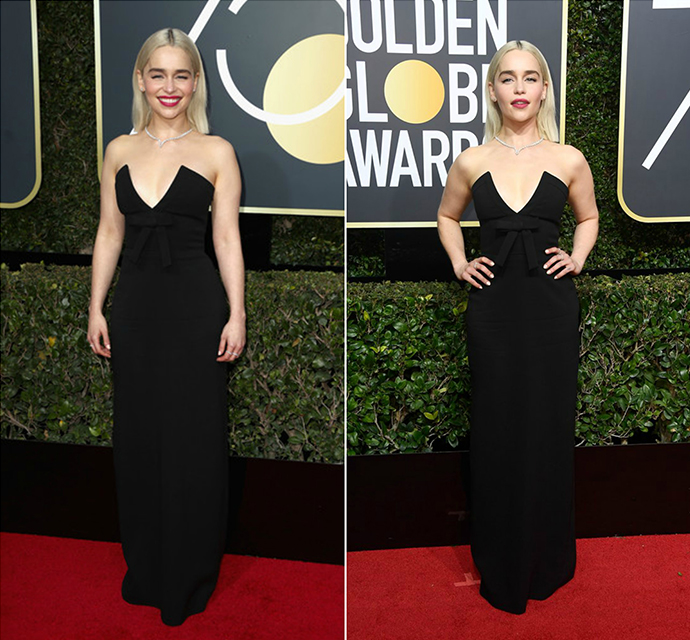 MARGOT ROBBIE & DAKOTA JOHNSON IN GUCCI: With dramatic sleeves, plunging neckline and crystal embellishments, this Margot Robbie’s Gucci gown is definitely stealing the show! On the other hand, Dakota looked stunning in her Gucci gown featuring intricate embellishments on the back. 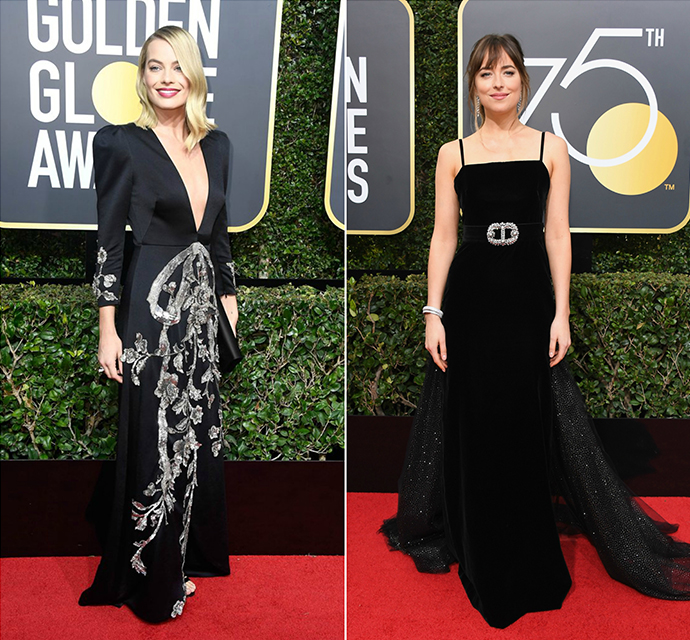 KATHERINE LANGFORD IN PRADA: The 13 Reasons Why star wore an embellished Prada gown and with loose curls she surely made a statement. 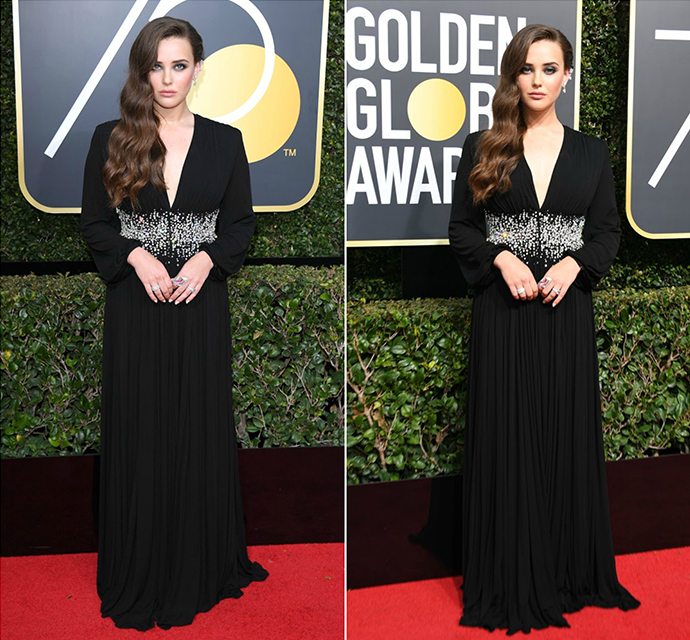 MILLIE BOBBY BROWN & SARAH PAULSON IN CALVIN KLEIN: This little one has been giving a tough competition to everyone with this unique Calvin Klein dress. Sarah Paulson was also seen in a CK gown with sequin detailing.

NICOLE KIDMAN IN GIVENCHY: This gorgeous dress by Givenchy features feminine lace detailing had to be on the list! 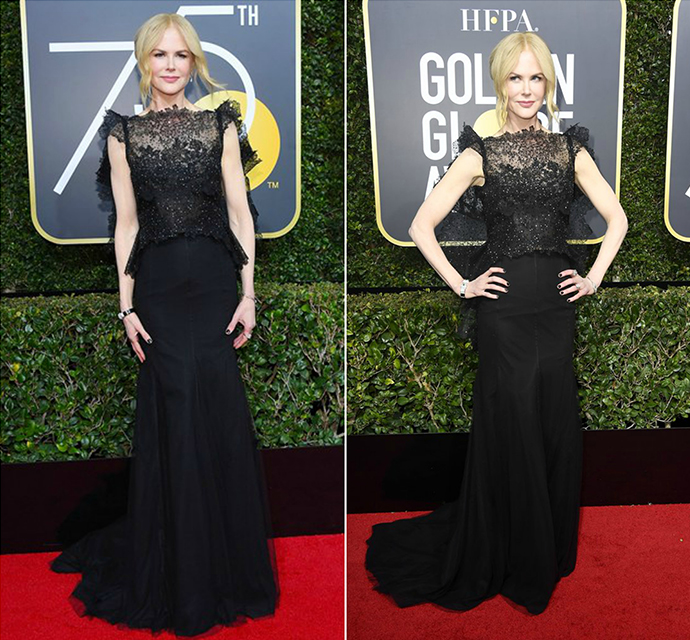 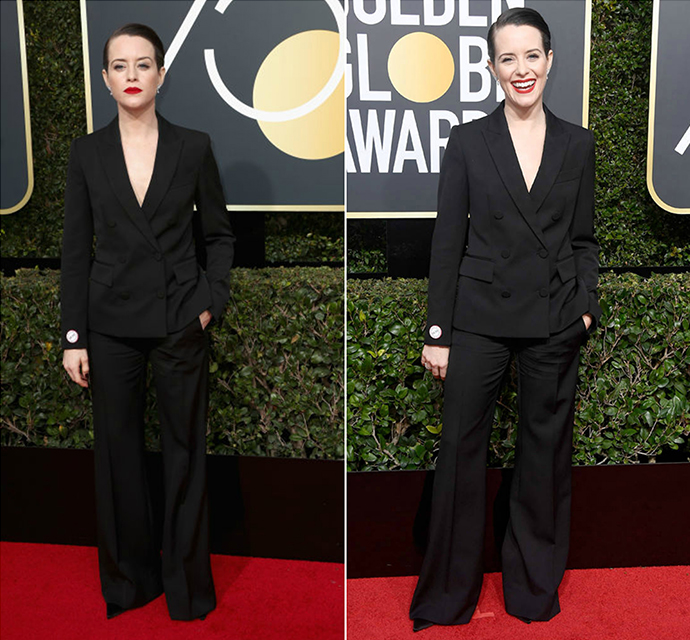